In the middle of a grey sea there is a grey isle. On this grey island grey hunters live. The life is simple and harsh. Seals and hunters live together in a cruel balance. One day, the Photographer arrives to document this everyday life. For him it turns out to be deadly complicated. 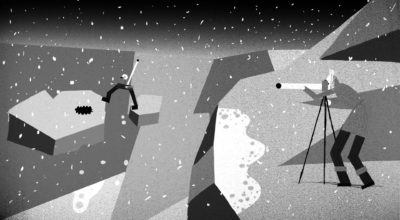 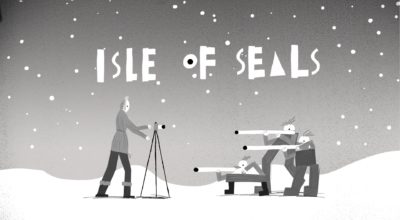 Edmunds Jansons was born in 1972 in Saldus, Latvia. He studied TV directing at Academy of Culture, has taken animation directing course at VGIK in Moscow,  but recently graduated MA at Estonian Academy of Art –  the masterclass led by Priit Pärn.

In 2002 Edmunds founds animation film studio Atom Art.  Studio tends to be a platform for young talented animators and their experiments. In the last years Atom Art has become one of the most noticeable creatively active Latvian animation studios. The films produced by Atom Art has been selected at the festivals all over the world, such as Annecy, Ottawa, Hiroshima, HAFF, Stuttgart, Zagreb, Oberhausen, Clermont-Ferrand, Dok Leipzig, Encounters, Anima Mundi and many others, and has been awarded in many of them. Studio works in variety of techniques – drawing, sand animation, animation with charcoal, puppet and cut out animation. There is also a big variety of animation genres – magical realism, animated documentary, musical, absurd, animated tv series for pre-schoolers a.o. Edmunds has worked as tutor of animation directing at Academy of Art and Academy of Culture of Latvia.   He is also film expert at Culture Endowment Fund and National Film Centre of Latvia. Besides his initial work Edmunds is recognized and beloved award winning children’s book illustrator. His books “Year of Wonderbaby” and “Poop and Springtime” has been awarded J.Baltvilks Best illustrations award and had been included in IBBY honor list. Each film has its own story of how it began. One begins with some sort of event while another with a vivid visual image. THE ISLE OF SEALS began with a peculiar place and its environment.