A childless couple in rural Iceland make an alarming discovery one day in their sheep barn. They soon face the consequences of defying the will of nature, in this dark and atmospheric folktale, the striking debut feature from director Valdimar Jóhannsson.

“Lamb” takes a low-key minimalist approach to its premise that invites a certain shock-and-awe reaction before doubling back to give it purpose.
The contrast between genuine depth and the silliness of the underlying concept is exactly what gives the movie such unique, if simplistic, appeal.
Rapace delivers a compelling performance loaded with frantic uncertainty about her new parenthood

Wild and weird folkloric drama, laced with brooding genre elements that veer into horror and a vigorous jolt of WTF humor.

The stunningly assured first feature will put the director on the map in ways not dissimilar to Robert Eggers’ The Witch.

A highly original take on the anxieties of being a parent, a tale in which nature plus nurture yields a nightmare. 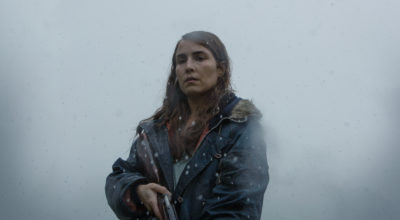