Blanca is an eighteen year old girl living in a social foster home for minors ran by father Manuel. A sexual scandal involving businessmen and top politicians puts Blanca and Manuel in the eye of the press and public attention, turning Blanca into a feminist martyr and key witness of the case. But as details of the investigation emerge Blanca’s situation turns out much more complex than it seemed at the beginning. 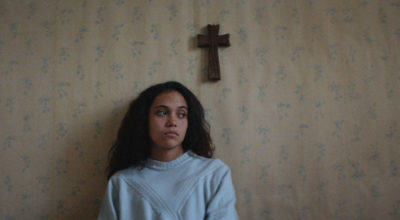 Fernando Guzzoni debuted in 2008 with the documentary La Colorina, with which he competed in the Films du Monde Festival in Montreal and for which he won the Best Director Award at the Santiago International Film Festival and Best Film at the Trieste Festival. His first fiction feature was Carne de Perro (Dog Flesh, 2012), written during a residency at the Cannes Festival, selected for more than 30 festivals and winner of awards at San Sebastian, Gothenburg, Havana, Punta del Este and Toulouse. His second feature Jesús premiered at Toronto International Film Festival and won a prize at San Sebastian’s New Directors competition.