Adam is a Christian Arab living in Nazareth – member of a vanishing minority within a minority in the Holy Land and the Middle East. His wife Lamia is a strong, beautiful and progressive Arab woman, who runs a foundation for women’s rights. When Adam hears that Lamia is pregnant and his father falls very ill, he evaluates his life and realizes that he has not achieved much. Despite all his business ideas failing so far, he gives one last try to make it big. And what’s better to sell in the Holy Land other than the very air that Virgin Mary breathed during her annunciation?

But in order to, as one priest tells Adam during confession, bring such product into the market he needs to find allies from the three cultures ruling over Nazareth – the Jewish politicians, the Muslim mafia boss and the Catholic church officials. In a politically unstable world where religion is just another merchandise, can the Holy Air be Adam’s salvation or is it just an illusion?

Humor in “Holy Air” is inseparable from its poignancy. Srour’s subtly crafted film unfolds as a memorable and confidently imagined human comedy.
The Hollywood Reporter

Energy and focus. (…) A combination of wry humour and strong sense of place.
Screen International 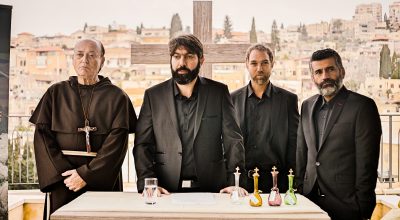 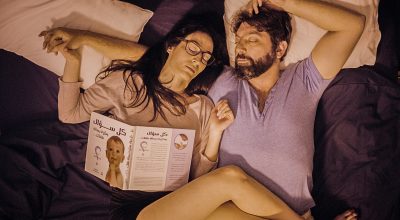 Actor, scriptwriter, director and producer for Cinema, Theatre and tv, and a lecturer at the Open University. He has b.a degree from Tel-Aviv University in Theater acting and m.f.a in filmmaking from the Academy of Art University. Lately Shady was involved in the film 24 HOURS JERUSALEM (ARTE), which won the German tv Award for best midlength documentary 2014. He was the Lead in the Oscar-nominated short film Ave Maria. HOLY AIR is his feature debut as director.