ROCKS IN MY POCKETS

ROCKS IN MY POCKETS

Rocks in My Pockets

Latvia, the late 1920’s. Anna, a young woman, pretty and educated, falls in love with an adventurous entrepreneur, 30 years her senior. But
with marriage comes great jealousy, and the entrepreneur hides Anna away in the forest, far from other men, where she bears him eight children. The Great Depression hits them hard. Then Latvia is overrun with invasions by the Soviets, then the Nazis, then the Soviets once again. Anna is a pillar of strength, defying the hardships, raising her young, teaching them survival secrets of the forest. But something inside her is terribly wrong.

Years later, Signe, a young artist, asks her father, “How did my grandmother die?” Her father is evasive. His seven siblings are evasive, as well. Signe strongly suspects that Anna committed suicide. Clues of mental illness had always leaked through the family stories. Signe suffers from depression herself. Three of her cousins, all women, battle madness, as well. Could there be a link between Anna and the four granddaughters?

Defying the stigma that silences so many, Signe takes us on a journey deep into her own depression where she looks to confront the family
demons. But, unlike her cousins, Signe finds an assuring guide in animation and art. 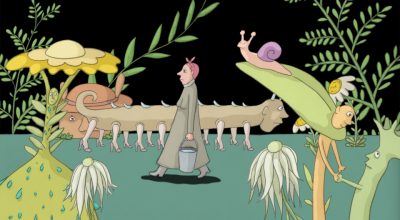 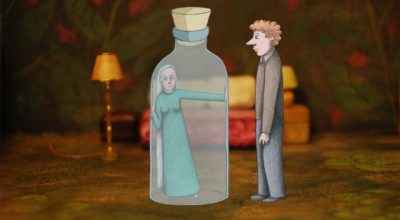 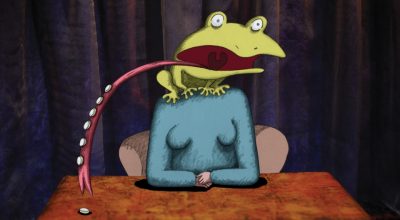 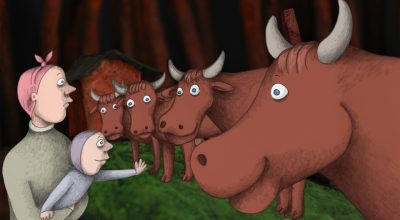 Signe Baumane, an independent animator known for her controversial films on the subjects of sex, pregnancy, dentists and madness, was born in Latvia in 1964. In 1983 Signe successfully passed exams to enter Moscow State University and study Philosophy. The one thing she learned in her five years of Philosophy study was that knowledge is relative: what you know to be the truth today can become a lie tomorrow.

In 1991 Signe was given an opportunity to direct her first animated short, THE WITHCH AND THE COW, a two minute story about a tiny witch trying to milk a humongous cow. When the film was finished Signe started to work as a freelance designer and illustrator with publishing houses in Moscow and Riga. She illustrated several children’s books and made sets for a puppet theatre. In 1993 she received another grant to make TINY SHOES, a personal fairy tale about a young woman who dreams to marry a prince, but has to live with a dragon instead. Eastern European film festivals recognized it as a bold feminist statement. In 1995 she received a grant for her next film THE GOLF OF THE TIGERS, a complicated tale of tigers who interchange dreams with reality and reality with dreams. With her first three films Signe developed her unique storytelling style – direct, head-on, unflinching – and pursued the subjects that she was most interested in: violence, power, womanhood, relationships between men and women. Her first films also showed her fascination with animals, which are a big source of her inspiration. In 1997 she applied for and received a green card as an Extraordinary Ability Alien in USA.

By that time she had saved enough money to make her first short on American soil: LOVE STORY. Between 1999 and 2009 Signe wrote and directed 11 more award winning shorts: THE THREATENED ONE (1999) produced by Pierre Poire of Italy, NATASHA (2001) coproduced and co-directed with Josh Rechnitz, FIVE FUCKING FABLES (2002), WOMAN (2002) produced by Rija Films in Latvia, DENTIST (2005), FIVE INFOMERCIALS FOR DENTISTS (2005), VETERINARIAN (2007) produced by Rija Films, THE VERY FIRST DESIRE NOW AND FOREVER (2007), TEAT BEAT OF SEX: Episodes 1 – 3 (2007) produced by Pierre Poire, TEAT BEAT OF SEX: Episodes 8 – 11 (2008) produced by Pierre Poire, and BIRTH (2009). In all of Signe’s work, the influences of Eastern European traditions like those of Stasys Eidrigevicius in illustration and Jan Svankmajer in animation are easy to spot. But her New York films have a new, specifically American sensibility with their accessible storylines, developed gags and outrageous humour.