We follow the Norwegian Martin and his pregnant Spanish girl- friend, Lucia, during their first 15 minutes on Norwegian soil, observing Lucia’s first encounter with this new culture and her in‐laws. It’s a car trip full of social tensions, expectations and misunderstandings. Brilliant observational comedy done in one shot. 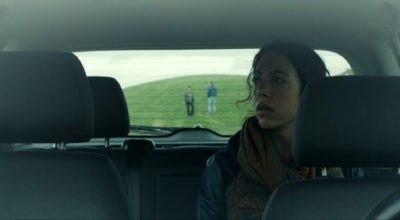 Gunhild Enger (1980) graduated from Edinburg College of Art, and The School of Film Directing in Gothenburg. She was nominated for a BAFTA with her graduation film BARGAIN, and has since then screened her films in festivals around the world. The film PREMATURE, won the international Grand Prix at Breif Encounter, Bristol 2012. Her film PASSION won for the best international short at Alcine, Madrid 2009. She is currently working as a director in Norway and Sweden.